There are two main paradoxes in the public relations (PR) industry that are counterintuitive to the very ethos it stands for.

The first paradox is on reputation. The PR industry prides itself on being the moral compass of an organisation by enhancing the reputation of business and industry. Yet the industry itself, often shrouded in secrecy, does not have the most stellar of reputations.

The second paradox is around effective and clear communication, of which the PR industry claims bastion of. Yet those who work in it often have difficulty explaining, in simple terms, what PR is and does.

It may take an entire book to explain the first paradox but PR entrepreneur, Rich Leigh, has had a crack at tackling the second in his new book, Myths of PR: All Publicity is Good Publicity and Other Popular Misconceptions (Business Myths)

“The question ‘what is public relations?’ is something countless people in PR have debated. It’s something that has been defined and redefined over the course of decades by the great and the good of the industry, but an awkward point remains: the general public are near-clueless as to what PR is and actually does.”

The book, which launched to great fanfare in March this year, aims to help those PR professionals who become stuck for a coherent answer when asked, “So, what is PR, then?”

Of course, the book offers much more and Leigh debunks a wide range of myths of PR that permeate the industry in the UK and beyond.

Some myths are based on stereotypes and others on lack of facts and information, but all of which serve no benefit to the PR industry and those who work in it.

Myths of PR is an antidote to the years of sensationalism and falsities in the public relations industry.

The book chapters are categorised by 18 myths. I won’t cover them all (buy the book) but I’ll pick out some of my favourites.

Myth 1. PR is all spin, smokescreens and lies

This is the most damaging myth that the industry faces and it’s easy to understand why.

In reality, most PR professionals are highly agreeable, conscientious and open and would score high on the OCEAN big five personality test. These traits attracted them to the industry to begin with.

Of course, there are instances in the past when PR has been the mechanism for negligence and abuse. The perpetrators in these events are rightfully scolded but the resulting backlash usually tarnishes the entire industry with the same brush as a few bad apples.

Leigh cites three main PR protagonists who received more than their fair share of media exposure as PR ‘spinfluencers’ over the years.

He references Clifford who once said that lying is a part of his job. Or, used to be a part of his job since he’s now behind bars for sex offences, some of which with girls under the age of consent. Says all you need to know about him.

The truth is, the PR professional’s role is to ensure that facts are made public and the position of a organisation (or person) is clear.  Though Leigh does caveat it with there being a transparency issue due to the nature of the business.

He advocates having a PR-related module taught to kids in secondary school. While this may be a pipe dream, learning good communication early on will help them throughout life as the skills are transferrable.

Leigh caveats the chapter by acknowledging that he doesn’t provide a definition of what PR is. What he does do, however, is clarify what PR isn’t and, given the industry’s reputation, that is more important.

Many moons ago, when I was studying sports science, I found my university’s prospectus for the coming academic year placed on a chair next to me. As I casually flicked through it I found the PR degree and naturally assumed it would be a career or parties and alcohol with a little work in between. I signed up for the degree immediately.

Let’s be honest, there is a little glam from time-to-time, but it’s usually between months of hard slog, stress and, OK, the occasional Sauvignon.

Leigh references fictional PR characters in TV and film like Ab Fab and Sex and the City as the public’s stereotypical view of a standard PR.

The reality is, PR is a gruelling job and is consistently ranked in the top ten most stressful professions. Usually ranked below police officer and surgeon but in the top ten nonetheless.

It’s a people business and sometimes people are dicks. You’re dependent on other people a lot of the time and sometimes they don’t pull through, leaving the PR to deal with it. It’s no coincidence that mental health is a growing concern within the industry.

“This red carpet-tinted view of what PR will be like sits uneasily with the reality that, according to 2015 research from the PRCA and PR Week of 1,500 respondents, 34 percent of the PR industry has suffered from, or been diagnosed with, mental ill health.”

I’m unsure on the national average though I presume it will be a lower percentile.

Final thoughts on Myths of PR

Leigh pays a lot of attention to research, weaving in data, facts and quotes from industry publications and insiders throughout. He tackles sensitive topics like the gender wage gap with data-rich research and specialist expertise.

He points out the current figures don’t stand up to economic scrutiny and he brings in a financial analyst to work through the complexity and nuances of the existing data.

Think of Myths of PR: All Publicity is Good Publicity and Other Popular Misconceptions, as a reference manual when asked all those awkward questions like “Don’t you just lie for a living?” or “My product’s great, it will PR itself” and other such nonsense.

Some myths in the book are as old as PR itself whereas others are related to new forms of communication like social media, therefore, it’s suited to industry lambs and dinosaurs alike. If you’re either you’ll get something out of it. 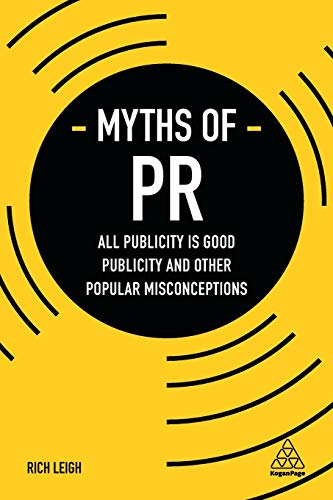 Myths of PR: All Publicity is Good Publicity and Other Popular Misconceptions (Business Myths)
View on Amazon