Money. Everybody likes it and wants more of it, but very few people know what it is.

In fact, money means different things to different people. To some, it’s an elusive object of desire, difficult to get hold of and harder to keep. To others, it means sacrificing the present for a future of stability and freedom. Some people see money as a means to acquire material items such as a house or a car, while others want it to buy unforgettable life experiences they can always cherish.

Whatever personal meaning one puts on money, it’s clear most of the world can’t do without it. To state the obvious, money runs the world.

Money is the reason we get up early every morning to go to work. It’s often why wars start and nefarious criminal activity takes place. But, of course, money isn’t inherently evil. It’s also why our standard of living has increased exponentially over the years and why so many people have moved out of the default state of poverty.

For something so important to the world, it’s a little discombobulating to realise that money isn’t real. In fact, it’s a shared fiction which billions of people around the world (pretty much everyone) believe in.

This is the premise of the book, Money: The True Story of a Made-Up Thing, by Jacob Goldstein (Amazon). In it, Goldstein takes you on a historical journey of money and its evolution through the years.

The book reminds me of Harari’s Sapiens: A Brief History Of Humankind which outlines why human imagination allows us to be the most dominant and successful species. Our ability to imagine and agree to man-made things like nation-states, religion, politics, culture and, yes, money, is why we have surpassed every other specie of animal on the planet.

What makes money valuable is our shared delusion in it. While money is not inherently real, it’s something that is part of our deep social fabric as Goldstein points out. “Money isn’t just some accounting device that makes exchange and saving more convenient. It’s a deep part of the social fabric, bound up with blood and lust. No wonder we get so worked up about it.”

The second key point Goldstein wants you to understand from the book is how inherently social money is.

“Money feels cold and mathematical and outside the realm of fuzzy human relationships. It isn’t. The social part of money – the ‘shared’ as in ‘shared fiction’ – is exactly what makes money money. Otherwise it’s just a chunk of metal, or a piece of paper, or, in the case of money today, just a number stored on a bank’s computers.”

Goldstein starts the book on the origins of money – in the form of coins – in Ancient Greece when it replaced barter. Instead of exchanging goods for other goods, it allowed people to use money so they could store value and use it elsewhere whenever they wanted. “The spread of coins – the rise of money – made people freer and gave them more opportunities to leave the life they’d been born into.”

Paper money, it’s assumed, was invented in Europe but it turns out this isn’t the case. Instead, it was an invention of the Chinese many centuries before, until it was quashed for some draconian reason. Paper money reemerged in Europe much later.

Speaking of Europe, the book lays out how the Italians invented the bank, the Dutch invented the stock market, the British invented the central bank, British goldsmiths mistakenly created fractional reserve banking, and a Scotsman by the name of John Law made France the wealthiest nation on earth by introducing paper money, many years after the Chinese. This ultimately brought France to its knees but that’s another story.

The book also covers how the USA became the financial powerhouse it is today. The introduction of the Federal Reserve and the removal of the gold standard which both were extremely important to the financial development of the country. And, of course, any book about money in recent times wouldn’t be complete without a nod to the global financial crisis of 2007/08.

Money, and thus value, used to be attached to a material store of wealth. Usually gold – hence the term ‘the gold standard’ – and to a lesser extent silver. A country’s money supply was originally determined by how much gold there was stored in its vaults as pointed out by economist and author, Saifedean Ammous in The Bitcoin Standard.

Over time, however, paper money became increasingly detached from any material store of wealth as governments came off the gold standard and moved towards the modern financial system we use today.

Goldstein says coming off the gold standard was the most important thing that’s happened to money in recent times. It has allowed for much more wealth to be created around the world and governments can create more of it during a crisis, as they have during the Covid-19 pandemic as we find ourselves in today.

But what about a world without cash? He says of all the ways that money might change, one is particularly easy to imagine: paper money might disappear. But a cashless society probably means more of a surveillance society.

He argues that a total cashless society may not be the way forward. Interestingly, according to him, there are more circulating $100 bills than $1 bills and most big-time criminals use the latter. He says removing large bills from the system but keeping smaller ones for day-to-day transactions may be the best solution.

Money: The True Story of a Made-Up Thing, is an easy-to-read book chock full of interesting history and information. Goldstein’s writing style is very accessible meaning the book is catered to the more average reader rather than economists or finance professionals. Though no doubt they’d learn a lot too.

It’s quite clear the book was meticulously researched before writing. Couple this with Goldstein’s long-standing hosting of the Planet Money podcast on NPR makes him the undisputed expert on the past, present and future of money.

If this piques your interest then this book is for you. 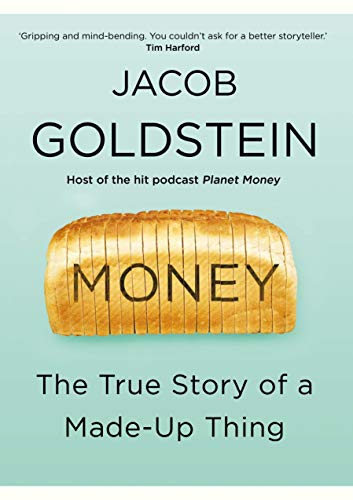