Robert Greene is back after a six-year hiatus with his latest book, The Laws of Human Nature.

This is Greene’s sixth bestseller, two of which I’ve reviewed here on the blog before. The 48 Laws of Power and Mastery should be on your reading list if you haven’t read them.

Greene hasn’t disappointed this time around either. The Laws of Human Nature is the best book I read in 2018 and one of the best books I’ve read ever.

The book is a perennial seller and in typical Greene it contains social psychological lessons from human history you can use as a point of reference time and again.

According to Greene, The Laws of Human Nature was around five years in the making. Although this could be him giving a nod to Law 16 in The 48 Laws of Power to “use absence to increase respect and honour.”

That said, with 624 pages, the book is dense and his most comprehensive one to date.

Compared with Mastery (352 pages) and The 48 Laws (480 pages), both of which are not pamphlets themselves, The Laws of Human Nature is a long read.

If you’re interested in social psychology and understanding how thoughts and emotions control human behaviour you’ll find it fascinating.

Kudos to Greene on how much extensive and thorough research has gone into writing the book.

I read the entire thing once and have gone back to re-read a few chapters again. I also bought the audiobook version to listen while I’m on the move.

The Laws of Human Nature is one of those books you have to read multiple times to get a comprehensive understanding of all the laws included in it.

What are Greene’s Laws of Human nature, exactly?

The Laws of Human Nature are the collection of forces that make us think, act and react the way we do.

These forces include the particular wiring of our brains, the configuration of our nervous system, the way we process our emotions and moods, and the impact our upbringing and the groups we associate with have on us.

All of which have developed and emerged over the course of the five million years in the evolution of our species. Our concept of free will is a myth and often what we say is not what we mean.

The book goes well beyond the surface level of appearances and into psychological territory.

Greene draws on the vast literature of psychology from the last 100 years from the likes of Freud, Yung, Klein, Kahneman, Nietzsche, Aronson and many others.

He ties these psychological concepts in with historical figures and events including the likes of Coco Chanel, Lyndon Johnson, Napoleon, Martin Luther King Jr and many others.

Greene has identified 18 laws of human nature, all of which are categorised into an individual chapter.

He makes the point upfront that you have an understanding of the laws of human nature you can address them dispassionately.

Indeed, the first chapter is The Law of Irrationality with the key takeaway message being to understand how to be rational so it’s to your advantage.

Greene says by distancing yourself when someone acts against you, the situation can be examined without emotion to determine the deep unconscious motive behind it. As Schopenhauer who is quoted in the book noted.

“If you come across any special trait of meanness or stupidity, you must be careful not to let it annoy or distress you but to look upon it merely as an addition to your knowledge. A new fact to be considered in studying the character of humanity. Your attitude towards it will be that of the mineralogist who stumbles across a very characteristic specimen of a mineral.”

There are 18 chapters in total, each one outlining an individual law of human nature to help you become aware of each one in both yourself and in others.

Greene’s 18 laws of human nature are:

Take chapter 2, for example. The Law of Narcissism.

Firstly, if you’re reading this and believe the law of narcissism doesn’t apply to you then I have news for you.

Everyone is narcissistic to some degree, including you.

We all like to feel recognised and appreciated for our accomplishments but sometimes the need for attention overpowers our rational thinking.

We may have deeper narcissistic moments, fluctuating below the mark, particularly when depressed or challenged in life, but inevitably we elevate ourselves.

This is what Greene calls a ‘functional narcissist’ and it’s where most of us reside. Chances are, most people you interact with will be at this level.

Then there are deep narcissists. These are a small percentage of the population who are toxic and manipulating. A deep narcissist is not about self-love or any kind of love because they don’t know how to love at all.

The deep narcissists are the kind you have to watch out for. They can be quite charming initially and often become charismatic leaders as they tend to gravitate to those kinds of roles.

Power corrupts, as they say, but perhaps the person was already corrupted before they got in power. Perhaps their deep narcissism and charisma kept their shadow self at bay.

Greene says the key is to become self-aware of our own narcissism and turn it to self-love and project it outwardly. I found this part a little cooky and unusual from Greene as self-help type content is not usually his style. He’s likely pandering to critiques who often say his books are lean on the dark side of human behaviour.

Nevertheless, like each chapter, it shows you how to identify this toxic character type before it’s too late.

In human there are different toxic characters.

As well as deep narcissists, there are other “toxic types” Greene advises to look out for.

You’ll be able to see yourself in one of more of these toxic types. I can see myself in a few.

The Hyperperfectionist is a dedicated hard worker who puts in the longest hours of even the lowliest employee. On paper, they sound great but what lies beneath is someone who can’t delegate and has to oversee everything. These characters are more about power and control rather than high standards.

The Relentless Rebel hates authority and loves the underdog. Their dismay for the rules makes others find them exciting and exhilarating. Over time you begin to realise they have a compulsion to feel superior.

The Personalizer is thoughtful, nice and a little sensitive (like caring people can sometimes be). They tend to take everything and over time they become perpetually disappointed and eventually fall out with people they feel have wronged them.

The Drama Magnet has an exciting presence and high energy. They have many stories to tell and seem to relish on confrontation. Over time they wear you down by dragging you into all their drama and conflict.

The Big Talker has big ideas and projects they’re thinking about which will impress you but secretly they are afraid of the effort that would go into launching such things off the ground.

The Pampered Prince/Princess will charm you with their regal air and make you feel somewhat inferior. Over time they’ll get you to do work without payment to satisfy their childhood need to feel pampered and if they don’t get what they’ll show child-like behaviour and make you feel guilty for not helping them.

The Savior will save you from your difficulties and troubles. Some have genuinely good intentions whereas others need to exercise power and control.

The Easy Moraliser are often outraged at injustice in the world. The fight for equality and against wrongdoings. They’re really trying to cover up their own envy and impulses by judging and condemning.

The Laws of Human Nature is a masterclass in how influence and persuade.

Understanding how people think gives you the tools to influence and persuade them. The Laws of Human Nature teaches you not only how to read people but also understand their underlying motives to get them to do what you want.

When it comes to persuasion, you have to allay their insecurities by not mentioning it. This could be insecurity about their features or something they own are involved in like a business which is doing badly.

Second, you then have to confirm their self-opinion. People have a general set of self-opinion about themselves they believe to be true. You can soften their resistance by finding out what they are confirming them.

Self-opinions are dependent on the individual but Greene says there are three universal things people believe about themselves.

The first one being is that they’re autonomous and they act on our own free will.

The second is they’re intelligent in their own way. In other words, they may not have a high IQ but they have their own kind of intelligence, knowledgeable about a particular subject or good with their hands.

The third is that everyone believes they are human being. Remember, Hitler didn’t think he was the evil tyrant we know him as today.

Greene is admittedly pessimistic by nature which shapes his view of the world and his books. A dark shadow usually runs through his writing which is perhaps a reflection of his character.

Indeed, the book highlights the need for us to become aware of our shadow side and embrace it. A person with a rounded character is consciously aware of their own shadow and when it is in play.

An awareness and understanding of the shadow self also you to see it in others. The people who usually try to hide and deny their shadow self are the ones who claim, “I don’t know what came over me” whenever they do something out of character.

In the era of social media and the current political we find ourselves in, there’s never been a greater time to understand the forces of human nature in yourself and others.

Our culture celebrates ‘the self’ over the group so invariably we see various toxic and shadow sides played out online and elsewhere. Understanding when and why these manifest themselves is key.

That’s why Greene has created yet another masterpiece that will no doubt stand the test of time and become a bestseller for years.

The Laws of Human Nature is not only a great book but also a psychology point-of-reference you can refer to if ever someone does something out of character or treats you in a harmful way.

If you’re self-aware, reading it should also provide you with a little discomfort as you will undoubtedly see your shadow self in some of the characteristics and traits that Greene covers. And this is a good thing.

My only parting works are, if you’re still on the fence, buy the book. Or, if you’re like me, buy a few versions of it. 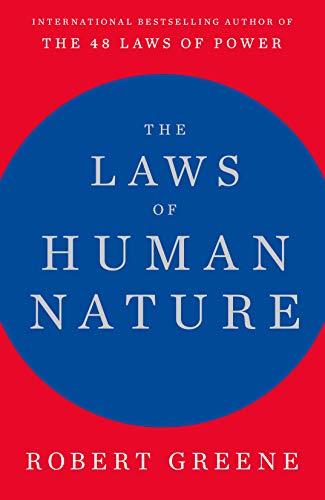 The Laws of Human Nature
View on Amazon