Fear: Our Ultimate Challenge by Sir Ranulph Fiennes (Amazon) is his latest book on the topic of fear.

Sir Ranulph has always peaked my interest. An adventurer-explorer with a great name and accompanying knighthood why wouldn’t he.

Walk into any Waterstones and you will likely pass some of his books. They’re quite easy to spot. Their front covers usually have his frozen headshot front and centre. Taken from some frosty expedition or at the top of one of the one of the world’s largest mountains.

I remember seeing documentaries and news clips of him when I was a kid which covered how he was intending to break a world record in some frozen wasteland that in my young age I’d never heard of.

Fiennes is the epitome of British grit. An ex-SAS soldier, adventurer, explorer, world record breaker and author. The Guinness World Records him as “the greatest living explorer.”

A few of his accomplishments include:

If Ian Flemming were around today Sir Ranulph would be the inspiration for James Bond. In fact, he once auditioned for it.

Like Bond, you’d assume that, given his accomplishments, Fiennes has little fear of anything. But unlike Bond, Fiennes is a real person and has to deal with fear like everybody else.

He points out there are varying degrees of fear. Anxiety is an emotion similar to fear “without any objective source of danger” whereas panic involves an “attack of intense fear when suddenly confronted with danger.”

“In my life I have found that anxiety is healthy if kept in its place, panic is to be avoided at all costs, and fear is a welcome mechanism that enables the body and brain to work at their best.”

Fear: Our Ultimate Challenge is very much a personal account by Fiennes. In fact it’s an autobiography of his life and all the times he has met (and usually overcome) fear.

He looks back on his early childhood living in Cape Town, South Africa, where he fell into a swimming pool and thought he would drown. Or where a spider fell on his head which resulted in long-term arachnophobia.

He talks about moving to England as a child with his mother and sister and contemplating suicide while at Eton due to bullying. In the army he was a tank commander and regularly feared getting his squadron lost while on patrol due to his inability to read a map.

He recalls his fear during the final of an army boxing championships he participated in. His final opponent was a gentleman named The Beast who by all accounts was fitting to his name.

He passed the SAS training to join the most elite special forces group in the world but was kicked out of for misconduct outside of work hours. His greatest fear during his time was of dying in warfare but of someone stealing his childhood sweetheart while he was away.

“On leave at home in Sussex I courted Ginny who, at eighteen, was tall, shapely and, as I well knew, much sought after by a member of local suitors. I lived in fear that once away with the SAS I would lose the love of my life.”

Ginny he remained married to until her death in 2004.

Fear: Our Ultimate Challenge is no wishy-washy book

The book is dark in places and very dark in others. He draws on examples of where people suffer real fear for genuine reasons. Sitting in comfort reading the book you feel that sense a fear when he draws upon tales of abuse and atrocities which are scattered throughout.

If you’re looking for a light inspirational read, this is not it.

One chapter is dedicated to living in hiding as a jew in 1930s Nazi Germany and is truly harrowing. Fiennes tells the story of two sisters whose loved ones were killed in horrific fashion by the regime and survived for years living in a cellar. The chapter gives an account of how Jewish people were rounded up from their homes in Germany, taken to the death camps and, in most cases, their ultimate end.

Another tells the tale of a now successful composer who suffered horrendous abuse by a boxing coach as a child. This book rightly points out that the world has been – and can be – a cruel and nasty place.

Fiennes has lived an interesting life and has met some interesting characters in his time so he has a lot of experience to draw upon. The book is scattered in places and includes many backgrounders to historical events that are unnecessary.

There’s a lot of examples of fear but no real practical advice on how to deal with it. It seems Sir Ranulph’s approach is to feel the fear and do it anyway.

There’s no ‘ten step’ approach to eradicating fear. In fact, there’s very little advice when it comes to dealing with fear. The book is more about situations that stir up fear and giving you, the reader, a distressing account in a bid to help you understand how bad life, and thus fear, can get. 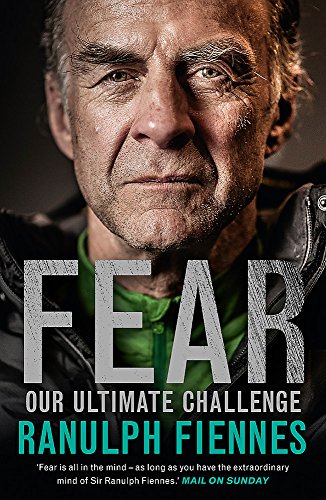