The first step to conquering an addiction is to admit you have a problem.

My name is Stephen and I’m addicted to technology.

Namely, I have an addiction to looking at my smartphone and checking social media.

While this kind of addiction doesn’t bring the same physical health issues as cigarette, alcohol or drug addiction, we still don’t know what the long-term effects of tech addiction are to mental health.

This is why it’s taken me on a path of digital minialism and becoming a digital minimalist.

Life before in an analogue world

I grew up without the internet and adapted to life with it. I can remember a time when access to information and keeping in touch with friends was done in mostly analogue form.

There was no ‘FOMO’ because if someone wasn’t in your immediate vicinity you never saw them.

If you met someone on holiday you’d probably never see them again. Today, you get to see people you’ve known for a couple of days play their entire life out.

Despite the recent technology backlash around privacy rights, it’s easy to reflect on the past with rose-tinted glasses so therefore I won’t.

The internet, social media and smartphones have changed the world for the better when you look at it from the macro level.

It’s easy to blame the tech itself when really it’s our use of it.

Solitude is a privilege

A few months ago I stumbled on this podcast interview between Vox’s Ezra Klein and computer science professor and author, Cal Newport.

Newport is the author of a number of books including Deep Work and So Good They Can’t Ignore You and has long been a proponent of deleting your social media accounts or, like him, never joining them to begin with.

He was on the podcast to discuss his then soon-to-be-launched book, Digital Minimalism: On Living Better with Less Technology, which you can find on Amazon here. 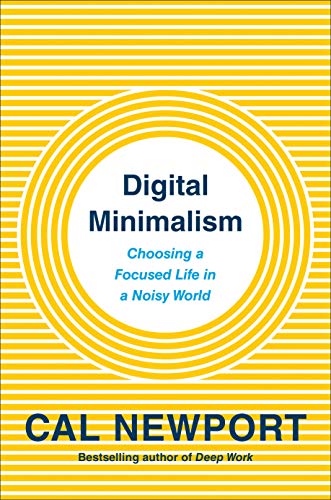 Digital Minimalism: Choosing a Focused Life in a Noisy World
View on Amazon

It’s an enlightening interview and worth an hour of your time.

Newport discusses how solitude has been banished from the modern world in recent years.

“How radical this is?” he says. “The last ten years is the first time in human history that it’s even possible on a consistent basis to banish solitude essentially completely from the everyday experience.”

He quotes the book, Lead Yourself First where the definition of solitude is “Freedom from inputs from other minds.”

It’s true. In today’s world of always-on and always-connected technology when do we have freedom from other minds?

You can be alone by yourself but if you’re using a smartphone, the internet and social media you’re not in solitude.

You’re not giving your subconscious brain time and space to do its thing. To surface ideas and concepts that otherwise wouldn’t have.

The road to digital minimalism

For years I’ve been aware of how distracted I and everyone else is by our technology use.

Smartphones are pocket supercomputers. Each day and for most of the day, you have all the world’s information as well as the potential to connect with billions of people in your pocket.

Social media apps have been engineered to keep us coming back for more and more because user attention means more ad revenue and a greater valuation on Wall Street.

The technology that’s important to me

Digital minimalism isn’t about eradicating every piece of technology you use. We live in an information-based world and not only do I enjoy using technology but I need it for work and to live. Going full ‘monk mode’ would not work for me.

Newport advises people who embark on digital minimalism to go cold turkey from all technology for a month. They then slowly introduce the most important ones that add value to their lives.

I don’t have that luxury as ‘digital’ is what I do for a living. Instead, I considered which technology I either need or enjoy using and slowly began to remove everything else.

Not only do I like having a computer and a smartphone I need them for my work. And with a podcast comes a whole new batch of gadgets and software to own and learn.

What’s the ROI on social media?

For me personally, Facebook has little to no ROI other than using Messenger for group chat with friends.

Instagram’s novelty has worn off and the endless scrolling, double-tapping and swiping have become tedious.

My LinkedIn feed mirrors the Facebook newsfeed of full of inspirational videos and the business lessons we can learn from them.

Twitter still has utility for me because it is an aggregator of news despite its political toxicity.

I don’t consider blogging and podcasting a form of social media. Long-form writing, speaking and interviewing are valuable skills to develop.

Newport says you should remove any people you’re connected within social media if you don’t have any plans to see them again.

“If you find yourself merely liking someone’s photographs over the course of the year, you should probably detach from them.”

It’s a fair point. What value is in seeing the daily lives of people you no longer really know?

The person you once worked with but haven’t seen in ten years. The group of people you met on holiday back in 2009 but other than liking a picture on Facebook occasionally you haven’t seen since.

This is the first time in human history we’ve had to contend with these issues so there is no guidebook.

Personally I have no problem unfollowing and unfriending people if I’m no longer going to see someone again. I have the memory and that’s enough.

If that’s too much you can also unfollow or mute depending on the platform.

My Facebook feed is a barren landscape except for the occasional update from a close family member.

I’ve muted or unfollowed a ton of people on Twitter who tend to be negative about the world. I don’t need them projecting their feelings on to me. Twitter’s word muting button also helps.

As we move through our digital lives we collect baggage in the form of data.

Despite being a long time Spotify user, I kept most of the MP3s I’d ripped from the internet 15 years earlier.

I had random obscure photographs I took when I bought my first digital camera before the proliferation of smartphone photography. And also PowerPoint presentations and Word documents from a decade ago that are out of date and thus no longer relevant.

Yet, here I was keeping them in storage and occasionally moving them to a new online storage service when I’d switched over.

It was pointless keeping them so I did a massive data dump and deleted gigabytes of old data.

I also removed apps from my Macbook and deleted my account to websites I no longer use.

Even though data doesn’t have weight it still feels as baggage and something that requires storage and brain processings. It’s one less thing to think about.

The utility of the smartphone

In an era where the average person checks their smartphone 80 times a day, I considered moving to a basic talk and text phone to remove any distractions.

I can’t go back to a ‘dumb phone’ as like everyone else I’m dependent on my smartphone to live my life. It did, however, make me consider the utility of my iPhone and where I get the most value from it.

I whittled down to these key areas.

Again, it’s social media that is the biggest distractor on a smartphone. For me, anyway.

I’ve also turned off all phone notifications other than calls or text so I have to open to the apps to check for updates.

I always do my best thinking on a plane thousands of feet up in the air.

I never knew why that was. Cabin pressure maybe. Or looking out of that small window at the vastness of it all.

Or maybe it was because up until recently most flights had no internet.

I tested Newport’s assertation that we need solitude (e.g. freedom from other minds) to be able think clearly so started going for long half-day walks without my phone or any other tech.

As little into an hour of a walk, I’d notice a change in my thinking. My brain would run off in new directions, resurfacing memories and previous thoughts.

If I had an issue going on in my life, it would help me think it through more clearly. It’s like I was tapping into a deeper state of my mind that I hadn’t visited for a while.

It also made me more social. I had to ask strangers for the time which I hadn’t done for many years.

I was more alert with my surroundings and would observe how other people are constantly glued to their phones.

Walking down a busy high street I’d count around 50 percent of people were interacting with their phone at that given time. It was like a zombie apocalypse as people lose themselves and their surroundings staring blankly into their phones.

Digital minalism is an ongoing practice

The world is moving faster than ever and it’s largely driven by technology. We are all struggling to keep up with the rate of change.

Keeping on top of advancing technology is a necessity if we want to remain relevant.

This is where I think practicing digital mimalism can help. It helps you focus on the technology that’s important and brings the most value to your life while removing everything else.

Tech addiction is real so practicing digital minimalism is an ongoing process.

Personally, if ‘digital’ wasn’t what I do for a living I’d be more aggressive with my approach to digital minalism and maybe one day it won’t be.

For now though, I’m trying to keep up like everybody else.