If you’re looking to understand bitcoin on more than a surface level bitcoiners will you there are two bitcoin guides that are must-reads.

The first one being the original bitcoin white paper. The document published by anonymous and mysterious bitcoin inventor Satoshi Nakamoto who outlines the technical and philosophical premise for a new ‘peer to peer electronic cash system.’

The white paper is considered the bible of the bitcoin space illustrating Nakamoto’s vision, genius and sheer gall for designing and proposing a new form of money.

The second must-read publication is the book, The Bitcoin Standard, which despite its title is more than just a book about bitcoin. It is in fact a book about monetary theory and history and how bitcoin fits into it all.

Written by economist and professor, Saifedean Ammuos, The Bitcoin Standard takes you on a journey starting from the introduction of money through its stages of evolution to present day.

The concept of money has changed throughout human history – most notably from gold and silver to the paper money we use today. Before that, copper, seashells, salt, precious stones and cattle were all once forms of money too.

One thing that hasn’t changed regardless of the form of money used is the human propensity to exchange value for goods and services. This has been uniquely part of the human experience since the beginning.

Money has shaped the world throughout the ages and has been the driving force of many good and bad events in history. Money is not real but rather a belief system exclusive to humans, along with capitalism, country borders, religion and politics as noted by Yuval Harari in his best selling book Sapiens.

Other than economists and perhaps die-hard bitcoiners, most people give little consideration to what money is and where it comes from.

If you told someone in the 16th century that their gold and silver coins would be replaced by paper in the future they may have laughed at you for being so ridiculous since paper has no intrinsic value.

Likewise today and thanks to the digital revolution we find ourselves in, our concept of the world is changing as new industries are invented and old ones are reinvented. Perhaps the reinvention and reimagining of ‘money’ is no different.

Ammuos makes the case that throughout history money has lost its monetary status usually because of oversupply. He covers the old system of Rai stones that, due to their scarcity, once served as the standard form of money in the Yap Islands.

For centuries and possibly millennia this monetary system worked well for the Yapese until an entrepreneurial Irish-American landed on the shores and brought more of the stones from neighbouring islands devaluing the money in the process.

In an era where central banks like the Fed and Bank of England are printing more money through quantitative easing to prevent financial meltdown, the oversupply of money in the system and devaluing of currencies like the US dollar and British pound may be more similar to the Rai stones than we think.

Of course you don’t have to go that far back in history to learn about failed currencies. The German papiermark, Argentinian peso, Zimbabwe dollar and most recently the Venezuelan bolivar have all failed due to hyperinflation.

Could the US dollar fail with bitcoin becoming the global reserve currency in what has been named hyperbitcoinization? It is possible and time will tell.

The bitcoin standard as the digital reincarnation of the gold standard

Most of the world came off the gold standard in 1971 but Ammous argues that it was a far superior system to the ‘fiat’ currency system we have today, and that the ‘bitcoin standard’ will be its digital reincarnation.

Ammous argues his case well, citing the remarkable, indeed almost uninterrupted, economic boom that much of the West enjoyed during the years of the gold standard.

Much of the book is concerned with economics in general and excellently argued critiques of the current world monetary system, laying the foundations for why bitcoin is so useful and necessary.

It was written before the COVID-19 outbreak but I suspect the arguments are all the more relevant now national governments will aim to inflate their way out of trouble.

Who is the book for?

I was already onboard with bitcoin before I read the book but it’s helped solidify my belief in the system and provided me with a greater narrative for understanding and communicating it to others. Bitcoin is a difficult concept to grasp for those who are new to it because it involves a range of disciplines and not least an understanding of economic history and theory.

While the book doesn’t cover the technical elements of the bitcoin protocol such as the blockchain it will benefit a number of people including:

Regardless if you fit into these categories or not, you should read it anyway – it may change the way you view the world and your hard-earned money. 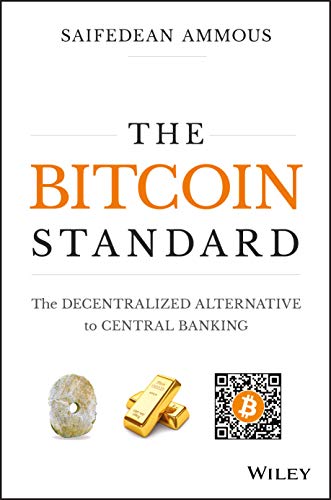 The Bitcoin Standard: The Decentralized Alternative to Central Banking
View on Amazon